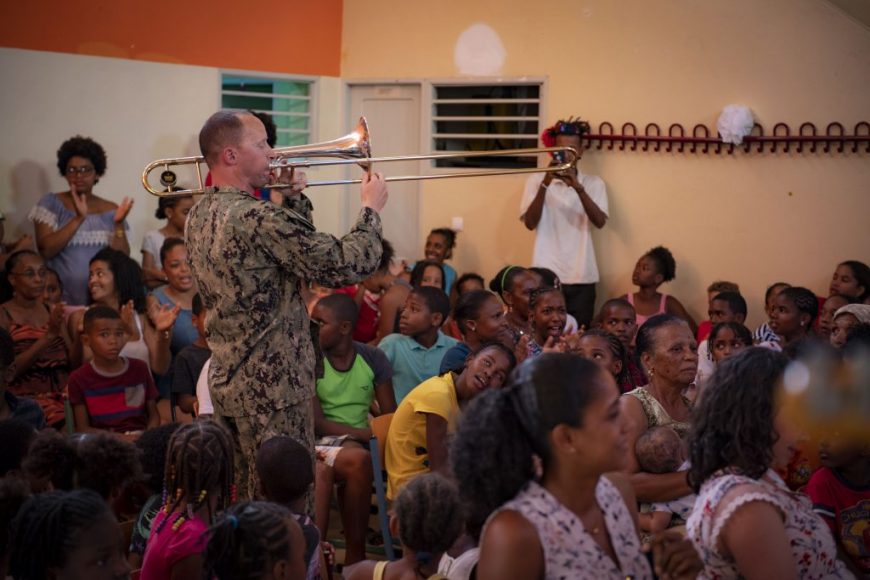 Greetings from USS Mount Whitney, flagship of the U.S. 6th Fleet, underway in the Mediterranean Sea!

Today marks a great day in our Navy’s history.  Seventy years ago, on Feb. 12, 1950, the Navy formally established 6th Fleet, building on the storied legacy of U.S. Navy ships that have sailed on the Mediterranean Sea since the early 19th Century. From 1801, with the dispatch of USS Constitution and her sister ships to defeat the Barbary pirates, through today, American sea power has operated throughout this strategic region, which in ancient times was viewed as the center of the world.

For the past 70 years, 6th Fleet has been a stabilizing force across the region through both our persistent presence and our ability to deliver effects across the full spectrum of maritime operations.

While standing on the bridge wing looking out at the busy waters of the Med, I took a moment to reflect on the strategic environment that led the Navy to establish 6th Fleet 70 years ago, especially in context of Great Power competition we see today.

The 6th Fleet Command History report from 1950 to 1958 gives us a window into the thought process at the time: “As the war ended and the U.S. sought peace treaties and rapid disarmament, it became increasingly apparent in the Mediterranean, as elsewhere, that Russia, our wartime ally, was to become the main threat to our security and order in the world.”

Although the Navy had hoped to draw down its presence at the end of World War II, our leaders quickly saw the need to keep a maritime force in these waters to protect U.S. interests, support U.S. policies, and serve as a strong southern flank to NATO forces in in Western Europe. Naval Forces Mediterranean was created to deliver this forward operating presence. This new force became Commander 6th Task Fleet, and ultimately, Commander 6th Fleet, and in its NATO hat, Striking and Support Forces SOUTH.

The stakes were
high. As Adm. Forrest Sherman, Chief of Naval Operations, said in
1950: “The survival of this country depends upon letting the world know we
have the power and the ability to use it if the occasion demands.”

Given that context, it wasn’t surprising to learn that our mission
today is not all that different from the mission of the Fleet back then, which
was “a twofold mission for peace: first and foremost, to maintain at all times
a high degree of readiness and combat effectiveness; and secondly to spread and
foster good will between the Mediterranean nations and our own.”

Maritime threats know no boundaries, and 6th Fleet’s 360 degree view of the world enhances our ability to operate seamlessly across the maritime domain with our Allies and partners alike.

For the past 70 years, 6th Fleet has been a stabilizing force across the region through both our persistent presence and our ability to deliver effects across the full spectrum of maritime operations. On the short list, we’ve cleared mines from the Suez, conducted Non-combatant Evacuation Operations, supported earthquake and other disaster relief efforts, and worked with and as part of NATO to support the resolution of the crisis in Kosovo, as well as in operation Odyssey Dawn in Libya. More recently, we established Aegis Ashore Romania to contribute to the defense of Europe from Ballistic Missile threats from the south, conducted strikes into Syria in response to the Syrian government’s use of chemical weapons on its own people, returned to the arctic with USS Harry S. Truman Carrier Strike Group operating in Norway’s Vestfjord, and worked with 5th Fleet to conduct a combined exercise in the waters off East Africa and the Indian Ocean.

Maritime threats know no boundaries, and 6th Fleet’s 360-degree view of the world enhances our ability to operate seamlessly across the maritime domain with our Allies and partners alike.

And although we’ve adapted
our operations and exercises to address the changing security environment of
the past 70 years, one thing has remained constant: the inherent flexibility of
the Navy-Marine Corps team to deliver combat ready forces, when needed and
where needed, providing credible deterrence and response options for our
national leaders.

Like those who came before us, 6th Fleet continues to serve as part of America’s Away Team, using the tools of naval power and presence across the region to deter, defend, and when required, fight and win far from America’s shores.

As Adm. Mike Gilday, Chief
of Naval Operations, recently said: “Mission one for every Sailor is a ready
Navy…a Navy ready to fight today. That readiness translates into deterrence,
into economic security, and preserves our defensive margin.”

For the past 70 years, 6th Fleet has made readiness our mission.  We’ve translated that readiness and delivered on our motto: “Power for Peace.” Working alongside our capable Joint Force and our Allies and partners, we are ready today, and will be for the next 70 years–and beyond.

To all who have served in 6th Fleet in the past, to all who are serving today, and to our families and friends that make it all possible…from Mount Whitney, Happy Birthday!  I am confident that those standing in our shoes in 2070 will look back with pride on all we have accomplished together. “Power for Peace.”