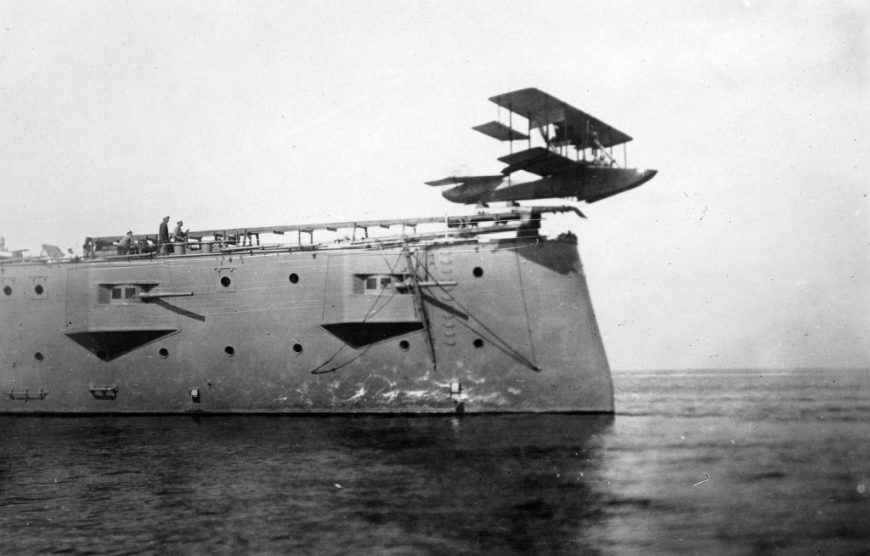 U.S. Naval Aviation marks its early beginnings on May 8, 1911, with a purchase request made by Capt. Washington Irving Chambers for the Navy’s first aircraft. In the years leading up to World War I, pioneer aviators pushed the development of hydroaeroplanes and flying boats, turning them into effective tools for warfare and working to integrate Naval Aviation into the Navy’s mission to protect and control the seas.

The colorful history of Naval Aviation is filled with hundreds of unlikely milestones, linked through the years by imagination, innovation, and good fortune—all building on the hard-fought lessons and determination of daring pioneers.

These lessons have
sharpened for me in the last week amid a whirlwind of change, as I find myself stepping
into the shoes of leaders who many of us have studied and tried to emulate
through the years.

Just one week ago
today, I assumed command of AIRLANT, when I relieved Rear Adm. Roy “Trigger”
Kelley as Commander, Naval Air Force Atlantic in a small, but memorable ceremony
at AIRLANT headquarters on May 1. Talk about big shoes to fill: Trigger
superbly commanded AIRLANT for more than two years and is retiring after 36
years of Naval service.

So today, it’s most
fitting to step back and to commemorate a truly great day in our Naval Aviation
history: Our 109th birthday!

For starters, everyone
who knows Naval Aviation knows of the courage and exploits of Eugene Burton Ely,
who performed the first aircraft takeoff from the cruiser USS Birmingham anchored in the Chesapeake Bay
on November 14, 1910. The story goes he flew about three miles in less than
five minutes and set his plane down on a nearby beach. That pivotal takeoff
would lead to accomplishing the first carrier arrested landing on the cruiser
USS Pennsylvania (ACR-4) in San Francisco Bay just two months later on January 18, 1911.

But few may know the name of the officer who proved to be the driving force in formally establishing Naval Aviation: Capt. Washington Irving Chambers—the first to have oversight of the Navy’s Aviation program. In fact, it was Chambers who arranged for that first takeoff and arrested landing by aviation pioneer Ely! Talk about aviation innovation at its best!

At the time, Secretary of the Navy George von Lengerke Meyer selected Chambers to determine the feasibility of Naval Aviation for military uses by the U.S. Navy bestowed upon him the responsibility for developing aviation in the Bureau of Navigation. Chambers prepared and submitted the first requisition for a Triad A-1 aircraft, and that airplane was purchased on May 8, 1911, thus officially marking the birth of Naval Aviation.

A hand-picked group of
aviators assisted Chambers in creating this defining program and came to be known
as the Navy’s first designated aviators, a cadre from which all Naval aviators
have followed in their stead.

Some of these follow-on pioneers included the likes of Cmdr. Theodore Ellyson, who was the first of these Navy-designated aviators. Initially serving as a submariner, Ellyson was ordered to North Island, Calif., for instruction in aviation under Glenn Curtiss, the founder of the U.S. aircraft industry. While stationed in North Island, Ellyson earned his wings and served as an experimental test pilot for the budding Naval Aviation program.

Other pioneers who paved the way included Adm. John Towers, who fostered many organizational elements of Naval Aviation. Tower trained under the tutelage of Curtiss and Ellyson, and ultimately became the first aviator to reach the rank of admiral. During his distinguished career, Towers created the first official Naval Air Station and flying aviation unit at Greenbury Point, Maryland.

Still others, such as Lt.
Cmdr. Henry Mustin, distinguished themselves as pioneers. Mustin completed the
first catapult launch from the stern of the armored cruiser USS North Carolina (ACR-12) off the
coast of Pensacola, Florida. He was an outspoken proponent on the potential of
Naval Aviation and assisted in the design of seaplanes with his fellow naval
aviator, Kenneth Whiting. Every aviator who launches from a carrier today
follows in their hallowed footsteps and all of us recognize these pioneers
through the Air Stations that bear their names.

These aviators are just a handful of many who would define a century of innovation and triumph. The U.S. Navy has led a wild ride through the years, transitioning from sea planes launched from the back of warships to Super Hornets, propelled by twin turbofan engines, and finally to the cutting-edge stealth technology of our F-35. From the successes of our early aviators, we have defined an organization of Naval Aviation that has evolved as the Navy has matured in its mission of forward power projection.

As Naval Aviation expanded, so did the role of the squadron. That expansion paved the way for squadron designations that identify the functions of aviation within the fleet. On July 17, 1920, the Secretary of the Navy Josephus Daniels prescribed a standard nomenclature for the types and classes of naval vessels and aircraft. It is from this that the letter “V” was first used to designate heavier-than-air aircraft. It is a designation still used in assigning carrier hull numbers.

On July 1, 1938, the term Air Group became official with the creation of Air Group Commander billets. Numerical designations of these Air Groups followed in 1942, with the first being Carrier Air Group Nine (CVG-9). These Carrier Air Groups became Carrier Air Wings in 1963. The unique culture of Naval Aviation has also matured alongside technology and organization. Our aviators continue to ride on that cutting edge of innovation and our nation continues to depend upon and to benefit from that evolution.

Also, this month – on May 24 – the aviation industry will mark Aviation Maintenance Day. In the U.S. Navy, there is a long and proud history between aircraft air crew and ground crew. For instance, on Nov. 16, 1923, the Bureau of Aeronautics directed that all planes attached to vessels of the fleet were to be overhauled once every six months. The long linage of air crew and their ground crew were forever linked.

As the first CO of the Gerald R. Ford (CVN 78), I am watching with great pride the tremendous progress the ship has made in the last several months. She’s now more than six months into her 18-month Post Delivery Test and Trials (PDT&T) phase of operations, and the ship has attained flight deck certification and conducted more than 2,300 catapult launches and arrested landings using state-of-the-art flight deck technology.

Beyond earth’s orbit,
one of the aviators who embraced innovation and powered aviation to new heights
in the 1960s was Neil Armstrong. Before he walked on the moon as an astronaut,
Armstrong was a Naval Aviator. He is only one of more than a hundred Naval
aviators who have become astronauts—one in a line of great pilots, who continue
to proudly represent the nation as a U.S. Naval aviator.

As our U.S. Navy propelled further, we saw other pioneers advance in Naval Aviation, such as Naval Reservist Lt. Cmdr. Kathryn P. Hire, who was selected for assignment to Patrol Squadron (VP) 62 on May 6, 1983 and became the Navy’s first woman to be eligible to compete for assignments in aircraft engaged in combat missions. Seven years later, on July 12, 1990, Cmdr. Rosemary B. Mariner relieved Cmdr. Charles H. Smith as commanding officer of Electronic Attack Squadron (VAQ-34), becoming the first woman to command an operational aviation squadron.

Such are the individual triumphs and collective successes that have defined Naval Aviation through the years. These are triumphs we celebrate not only on May 8th, but every day of the year.

Finally, on this very day we mark the anniversary of Naval Aviation, is understanding the vital importance of our aircraft carriers. Our CVNs represent the most survivable air bases in the world. I expect that we work every opportunity to demonstrate the readiness, the lethality and the primary point that maneuver warfare is inherently naval. I believe that we are close to a point where CVNs will not be able to respond to our nation’s crises if force structure is further reduced or if we cannot increase the operational availability of these national assets. Operating these national assets are our people. For the people who have paved the way of Naval Aviation for the past 109 years, to those who stand the watch today, our people are in fact our greatest resource.  Our collective actions and deeds should reinforce that sentiment each and every day.

By Rear Adm. John Meier, Commander, Naval Air Force Atlantic U.S. Naval Aviation marks its early beginnings on May 8, 1911, with a purchase request made by Capt. Washington Irving Chambers for the Navy’s first aircraft. In the years leading …
Read More

“SAIL” More Important than Ever

By Chief of Naval Personnel Public Affairs Last month, there was a significant decrease in the SAIL referral rate and there is concern that commands are not submitting referrals due to the COVID-19 crisis. Now more than ever, the Navy …
Read More

Hire A Veteran Project™ is a project of Salute Veterans Inc.

Ways to Give
Donate Now