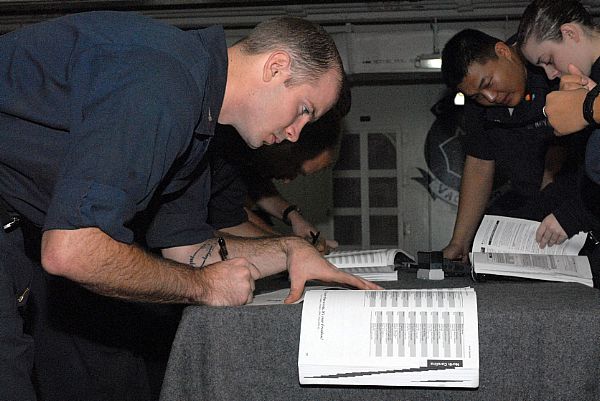 A guide for Sailors and Navy civil servants

With presidential and congressional elections approaching, the Navy encourages every one of us to exercise our right to vote.

Just as important is the right to free speech. But we also have the right to be free from political pressure while we’re at work. That means being mindful of laws that prevent us from using our position to advance a political view.

First, how much do you know about what you can and can’t do while on duty, in uniform or in the federal workplace?

Test your knowledge below–and then take a look at some great resources to help you stay on the right side of the law.

(Scroll down for the answers.)

1. I can wear my uniform at a political rally as long as it’s my Type IIs and my unit patch is removed.

2. It’s OK to volunteer for a campaign on your own time for things like phone banking, posting signs or asking for donations.

3. As long as I’m on my lunch break, I can “like” a political message on Facebook or retweet a candidate while I’m still on the installation.

4. It’s OK to have a poster of Presidents Teddy Roosevelt or John F. Kennedy on my wall since I served on both of the carriers named after them.

5. A campaign bumper sticker on your car or truck is permitted even while parked on a federal property.

6. I can bring to work a shirt with the logo #RESIST or Make America Great Again, as long as I don’t actually wear it.

7. A private conversation about a political issue is OK, even at work.

All federal civilians are bound by the Hatch Act of 1939. The U.S. Office of Special Counsel, which enforces the Hatch Act, offers answers to frequently asked questions about what’s allowed and what’s prohibited.

Some federal employees at certain agencies are subject to additional restrictions. For more information, visit the OSC’s Hatch Act information page. A quick summary is below.

Social media can be particularly tricky. The OSC offers this printable PDF chart for what you can and can’t do on social.

All federal employees may not:

– Engage in political activity via social media while on duty or in the workplace, or using government-owned equipment

In addition, further restricted employees may not:

1. False. You cannot wear any part of your uniform at a political function.

2. Mostly false. You can volunteer but can’t ask for donations.

3. False. Liking or retweeting while on federal property is not allowed, even from your personal phone while on your lunch break.

4. True. Since neither past president is a current candidate for office, you can display those items as allowed by your command or installation.

5. True. A normal-sized bumper sticker is permitted, even if you park your car on federal property.

6. False. The Office of Special Counsel has said that both slogans are political statements and so neither one is permitted in the federal workplace.

7. It depends. You still can’t advocate for or against a political candidate, but a friendly, private discussion of current events is allowed so long as the other person is a willing participant.

Read about real-world examples from the U.S. /Office of Special Counsel.
Read OSC advisory opinions on different aspects of the Hatch Act.